and I really enjoyed it! Southern Charm, though, is a show where every season is suburb in my opinion, never boring; for that reason, I was ready to crown season 6 the best yet!

But then in reflection, what actually happened? There was only so much of Cam’s motherhood journey and Craig’s pillow business I could watch. Oh, and if I had to see the video of Austen in his underwear yelling “Madison!” one more time, I’d have gone insane! I believe, too, that the show brought Eliza on just so Ashley could be back, which was pointless, in my opinion.

BUT! BUT! I still enjoyed tuning in every single week. I never felt like watching Southern Charm was a chore (much how I feel about RHONY). Plus, Madison did provide us a new iconic Bravo moment with the chlamydia accusation no one saw coming! While I heard the reunion wasn’t quite on say, Vanderpump level drama (rumor is they all partied together that weekend after filming the reunion), the finale brought with it a Patrica Party, which always brings both the glam and drama!

5 Takeaways From the Southern Charm Finale

I loved the opening scene with Kathryn and Patricia shopping for shoes and discussing Charleston gossip, mostly Ashley. It was a fabulous conversation and a fabulous scene for me as a fan; I’ve followed the blossoming of their friendship on social media since last season’s #HiAshley movement.

I’d also like to put on the record that Kathryn should just marry Whitney: they have a history since season one, they hooked up this season, I want more Kathryn & Patricia (and by more, I want them to be in-laws), and last, Whitney and Kathryn properly squashed any bad blood at the Stag party … meaning there is hope for them in the future after all!

aka … the girls from Austen’s video. Shady shady Shep, wtf! And to bring sweet baby Craig into your schemes? You should be ashamed! It’s sooo obvious that Shep has it out for Madison because she turned him down, right? What else could it be? It was the same reason Shep didn’t like Austen dating CHELT-sea.

Cameran even called Shep out on all of this, sooo you know it’s true.

It’s not a huge deal, but I was pleasantly surprised to see Cameran’s husband, Jason, show up to the party and agree to be filmed (even if Cam was paying more attention to Metul).

I saw that Kathryn was dating Hunter Price on Instagram and I was here 👏🏻 for 👏🏻 it 👏🏻 !! A) He’s not a politician, B) he’s her age, C) he’s a musician, D) they’re all around so cute together! I was happy to see him on the show because I didn’t think she’d reveal any details about him until maybe the reunion, but I ship them hard and want him to appear all over season 7!

I loved that Cam, Chelsea, Kathryn, and Naomie took the girls from Austen’s infamous video to ask what really happened, aka did s-e-x occur or not? Obviously the girls said no, although I have a really difficult time believing that. Plus listening to those two blabber on while smashed was just as difficult.

For “one time and one time only” Madison apologized to Shep for the Dani/STD comment. Shep didn’t seem to care, said he was not sorry for anything he’d done (why?!), and was all around either on something, or just being a completely terrible human.

He needs to atone.

While Ashley’s presence at the party was stupid and short lived, it brought great moments: Pat’s wink to security, everyone scurrering to the balcony to watch, Ashley calling Thomas, his suggesting she call 911, to finally, the update that Ashley left Charleston and is bffs with Landon (go figure)!

Naomie’s mom is freaking adorable & I’m in love with her! 💖

The hair stylists face when Ashley was talking about Patricia was/is all of us. 🤣 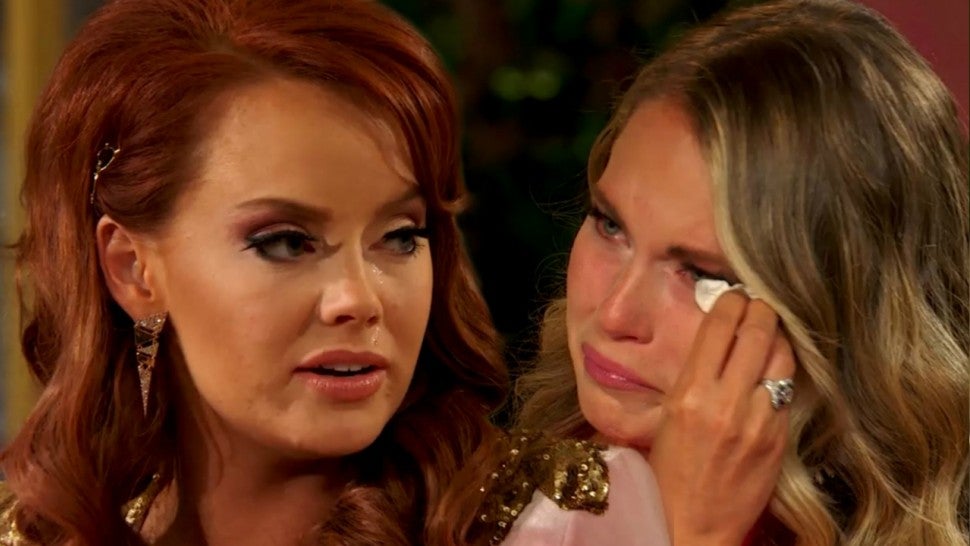 On an absent Thomas

First off, I’m SO GLAD Bravo addressed his absence and didn’t pretend this was a fluke thing. Thomas’s lawyer’s statement was total bs though; you know he would have been there in a heartbeat if he could have. Bravo totes made him stay home which was completely the right thing to do!

SO HERE FOR IT and Craig didn’t need to roll his eyes about it either. Regarding JD and his wife, you can’t compare Naomie and Craig to them … JD and Liz are married (or were?)! But with that being said, SCREW JD! Later good ol’ boys!

Also, if you find anyone on social media who has had a Shepard encounter, you’ll learn quick that he’s disgusting and I highly doubt he “took stock” of his past behavior or “thinks about it more” now.

In all honesty, I think Cameran is going to be an awesome mom! I couldn’t be happier for her. I also loved how Kathryn was commenting and agreeing and bonding with Cam.

On Naomie and Craig’s relationship

What’s sadder: Craig’s bent finger or his pillows? So he’s not getting paid to practice law? Is he spiraling? I need answers! Everyone on the couches just looked like they wanted to tell Craig, “Bless your heart!” Throughout the season, a part of me was a little bit on Craig’s side. However, he reminded me on the reunion how delusional he is!

By the way, Naomie’s boyfriend is SO HOT! How Craig can say she’s not happy is absolutely f’ing crazy! NAOMIE AND METUL WERE IN FRANCE WHEN THE FRENCH WON THE WORLD CUP! She’s clearly living her best life. All of Craig’s answers (“I actually despise her and hate her”) and facial expressions on the reunion clearly showed how peanut butter and jelly he is!

I am LIVING for her transformation! I don’t even have words to describe how high she’s risen and how amazing she is, especially alongside the fall and embarrassment of Thomas. (Karma anyone?) I would be so so so so so so so shocked to find someone in Charleston or on social media who isn’t #TeamKathryn!

On Cameran’s empathy towards Kathryn

Coming up next week …

We’ve been waiting all season for this!

I mean, didn’t even the premier episode start by showing the footage from the ball and then did that whole “five months earlier” or whatever drama-tic-ness Bravo enjoys…??

Okay to start it off, I can’t even LOOK at Shep’s face without thinking of the Facebook group The Jury Speaks; seriously GO JOIN IT for all the Bravo tea (there is a thread there on Shep; it’s seriously beyond gross!). Okay, moving on … the recaps with the music always get me LOL’ing!

Cameran is literally all of us laughing at Craig’s pillows. The tough love from her to him is so needed! I mean, not calling his life coach because he didn’t want to face his reality?? Get it together!

AS ALWAYS, Kathryn is winning the season, first discussing with Naomie how she was there for Thomas last episode. Then discussing the ball. Knowing now how Kathryn and Patricia are (like on Twitter), I’m not worried that Kathryn is going to do anything destructive. Go girl!

I am just so anxious and giddy and excited to watch the shiz go down at this ball!

I forget why Ashley is so mad at Kathryn because wasn’t Ashley the first to attack?! I think it’s just pure jealousy on Ashley’s part. Kathryn has Ashley beat before even confronted by her –> Kathryn researched “white tie” because she doesn’t want to mess up in front of Patricia.

From the awkward exchange between JD & Elizabeth, to the talk of Ashley being an escort, to Austen calling Ashley Cruella de Vil to her face …

Whhhhyyyy, why Austen are you going to tell Thomas what the girls are saying?! Here we go! (Freaking pot stirring Austen! Anyone see the video that got leaked of his girlfriend catching him in bed with two other girls? Apparently it’s an old video & they’ve “worked through it.”)

Austen: “Why am I being insulted?!”

Duh Austen, why would you even bring it up?! At the same time, Ashley’s deserves everything and anything that would come at her this point. Let’s table her for now. I’m sure we’ll come back to Ashley being dramatic soon.

Sidebar, Kathryn scores another point for being so elegant with Patricia (when she really didn’t need to be). I’m glad K sat down and talked to her; she did great!

An extra 15 minutes was added tonight because we need to see the K v. A fight to it’s entirety. After a very awkward (and tbh, a little sad) exchange between Naomie & Craig, here comes Ashley after Queen Kathryn. Whoa, I did not see Ashley apologizing … not that the moment lasted long.

The update from Bravo was EV ERY THING! So happy Kathryn now has 50/50 custody!!

Guys, the reunion is going to be unbelievable! Not just for the fact that Naomie and Craig will probs come for one another, or that Thomas won’t be there and everyone knows why … but the entire cast is going to stick up for Kathryn against Psycho Ashley and it’s going to be AMAZINGGGGGGGGG!!!