The Fourth is one of my favorite holidays and why wouldn’t it be? As Chad Johnson from The Bachelorette said it best …

and in order to celebrate, I thought I’d mention a few of my favorites to watch, read, & listen to on the American holiday.

I remember first seeing this movie when I was in the seventh grade, after just learning about the American Revolution in school. Sorry Mrs. Gurnee,  but THIS movie taught me taxation without representation better than any teacher or textbook. It stars Mel Gibson and a young, studly Heath Ledger in which “an unassuming man who is forced to join the American Revolution when the British threaten to take his farm away from him. Together with his patriotic son, Gabriel, the pair faces the vicious Redcoats with a heroism that reflects the stubborn pride of a young country’s most dedicated supporters.” 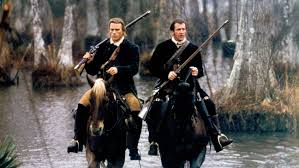 The historical context of the film is outstanding, the battle scenes are spectacular to watch, & Gibson’s performance will make you respect him if you don’t already.

OBVIOUSLY this movie made my list. Will Smith, Jeff Goldblum, Bill Pullman, Vivica A. Fox, & Randy Quad fighting aliens who come to take over our world …?

It just so happens the aliens are taking over around the 4th of July and it just so happens the ENTIRE WORLD comes together to battle ET, basically making Independence Day a universal holiday. Plus, Smith & Goldblum are Hollywood magic together! Oh, and #neverforget the aliens using Dr. Brackish Okun to communicate to us?! (cue Cookie Lyon again!)

Unless you’ve lived under a rock the past two years, you should have heard of Hamilton, a musical written by and starring Lin-Manual Miranda. This musical took over not only Broadway, not only the Tonys, but the entire country. Why wouldn’t it? It’s a hip-hop musical basically telling the founding of our country, but mainly centering around Alexander Hamilton. Now, I’m not one to shy away from show tunes, so obviously I LOVE this soundtrack, but it is So. Much. More. Than. Showtunes!

You can listen to the entire soundtrack here to get your feet wet. But, if you are strongly against any showtunes, Manuel created the Hamilton Mixtape, in which artists like Kelly Clarkson, Usher, Alicia Keys, Sia, John Legend, & more sing covers (and newly mixed versions) of the soundtrack.

To go along with the play & soundtrack, Miranda wrote Hamilton: The Revolution.

Not only does the book have awesome production photos, it has the background into why Miranda fell in love with Hamilton’s story, it has cast articles & interviews, and it has the entire lyrical library (I suggest following the lyrics while you listen along!). But, my favorite part in reading this was seeing all the notes Miranda included with the lyrics: his influences, how rhymes came together, the history behind a certain line, or how a certain song was linked to a modern day rap song. Lin-Manuel Miranda is seriously one of the most brilliant musical minds of our generation.